This Sunday is Father's Day in the United States. On this day we take time to remember, acknowledge, thank and pray for those men in our lives who have been a father or like a father to us. I think of Joseph, Jesus' earthly father and the role model he was for Jesus. Joseph believed in God, obeyed and trusted God and protected Mary and Jesus. Joseph was an ordinary man, who through God's grace, was an extraordinary part of our salvation.

We are God the Father's children; He watches over us, guides us and protects us.

On Father's Day, I think of my Father and the gifts he gave me. My Mother came from a Roman Catholic background and my Father was a Lutheran. When they married, he promised to raise his children as Catholics. He kept his word. On cold Sundays, he drove us to Mass and then picked us up after Mass. On warm Sundays, my Mother, brother and I would walk to church and back. When we would arrive back home, my Father would usually be sitting on the front porch enjoying the morning. He would ask us how Mass was and then tell us about his conversation with Jesus. I learned early in life that you don't just pray to Jesus asking for things and praying that rote prayer, but you talk with Jesus about the things in your life and He always answers! Sometimes the answer was NO, but He always answered and gave guidance.

As I reading the readings for today, the word Forgiveness filled my thoughts.

Then David said to Nathan,
“I have sinned against the LORD.”
Nathan answered David:
“The LORD on his part has forgiven your sin:
you shall not die.”

I acknowledged my sin to you,
my guilt I covered not.
I said, “I confess my faults to the LORD,”
and you took away the guilt of my sin.
R. Lord, forgive the wrong I have done. 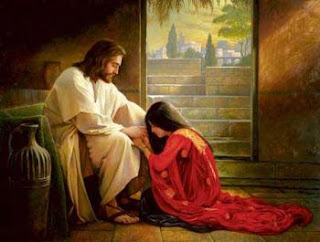 Luke 7:36-50A Pharisee invited Jesus to dine with him,
and he entered the Pharisee’s house and reclined at table.
Now there was a sinful woman in the city
who learned that he was at table in the house of the Pharisee.
Bringing an alabaster flask of ointment,
she stood behind him at his feet weeping
and began to bathe his feet with her tears.
Then she wiped them with her hair,
kissed them, and anointed them with the ointment.
When the Pharisee who had invited him saw this he said to himself,
“If this man were a prophet,
he would know who and what sort of woman this is who is touching him,
that she is a sinner.”
Jesus said to him in reply,
“Simon, I have something to say to you.”
“Tell me, teacher, ” he said.
“Two people were in debt to a certain creditor;
one owed five hundred day’s wages and the other owed fifty.
Since they were unable to repay the debt, he forgave it for both.
Which of them will love him more?”
Simon said in reply,
“The one, I suppose, whose larger debt was forgiven.”
He said to him, “You have judged rightly.”
Then he turned to the woman and said to Simon,
“Do you see this woman?
When I entered your house, you did not give me water for my feet,
but she has bathed them with her tears
and wiped them with her hair.
You did not give me a kiss,
but she has not ceased kissing my feet since the time I entered.
You did not anoint my head with oil,
but she anointed my feet with ointment.
So I tell you, her many sins have been forgiven
because she has shown great love.
But the one to whom little is forgiven, loves little.”
He said to her, “Your sins are forgiven.”
The others at table said to themselves,
“Who is this who even forgives sins?”
But he said to the woman,
“Your faith has saved you; go in peace.”

What hope these readings bring me. My God is a forgiving God. He knows the magnitude of my sins and yet he forgives them. I need only to sincerely ask for forgiveness and I will receive it. However, Jesus places an interesting caveat on forgiveness. When He taught us to pray, He said "...forgive us our sins as we forgive those who sin against us." In other words, forgiveness is a two-way street. If we hope to be forgiven, we must in turn forgive. That is our challenge.


May Peace, Blessings and Forgiveness be yours,