Reflections on the Fifth Sunday of Lent, 2013 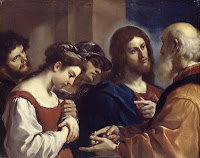 Jesus went to the Mount of Olives. But early in the morning he arrived again in the temple area,
and all the people started coming to him,
and he sat down and taught them. Then the scribes and the Pharisees brought a woman
who had been caught in adultery
and made her stand in the middle. They said to him, “Teacher, this woman was caught
in the very act of committing adultery. Now in the law, Moses commanded us to stone such women. So what do you say?” They said this to test him, so that they could have some charge to bring against him. Jesus bent down and began to write on the ground with his finger. But when they continued asking him, he straightened up and said to them, “Let the one among you who is without sin
be the first to throw a stone at her.” Again he bent down and wrote on the ground. And in response, they went away one by one, beginning with the elders. So he was left alone with the woman before him. Then Jesus straightened up and said to her, “Woman, where are they? Has no one condemned you?” She replied, “No one, sir.” Then Jesus said, “Neither do I condemn you. Go, and from now on do not sin any more.”

The basic story tells of the Pharisees and the Scribes scheming against Jesus. They hoped to trap Him into responding "yes or no" to their question of how to deal with the adulterous woman. With either answer Jesus would be in trouble, with the Romans or in violation of the Covenant. Jesus surprised them all, by going to the heart of things. He responded with love, forgiveness and reconciliation. In telling the crowd to throw a stone only if they were free of sin, Jesus reminds us that we are all sinful. What a scary, negative comment -- even if it is true. HOWEVER, Jesus then turns to the sinful woman and asks her who remains to condemn her of sin. When she responds, "No one sir," Jesus tells her that he also does not condemn her. In fact he sends her back into her community with love and forgiveness. Her responsibility is to "go and from now on do not sin any more."


Particularly during Lent, we are often mindful of our sins and of our need for Reconciliation with God. I am reminded that the sacrament of Reconciliation (Confession) is very similar to what we have just read. Often we are our own accusers and find it difficult to believe that we can truly be forgiven for our sins. We are too deep in that sinful habit, are embarrassed to face our sinfulness, and think that our souls just can't be made clean.

It is important to note that when the adulterous woman was brought before our Lord, he lowered his eyes so as not to look on her shame. Instead, his divine love enveloped her. Jesus not only scattered her accusers with their silent examination of their own consciences, he then offered her divine forgiveness and love. He did not excuse her sinfulness, but rather cleansed her soul and offered her the opportunity to begin again.

Just as the adulterous woman was forgiven and sent back to her community whole and ready to change her life, so we can leave the confessional and return to our community whole and ready to change. The true love of Jesus is always healing and forgiving; we just need to ask. The special grace that we receive though the sacrament of Reconciliation will help us.

In peace and love,