Of His Most Astounding Mercy, and Her Most Immaculate Beauty! 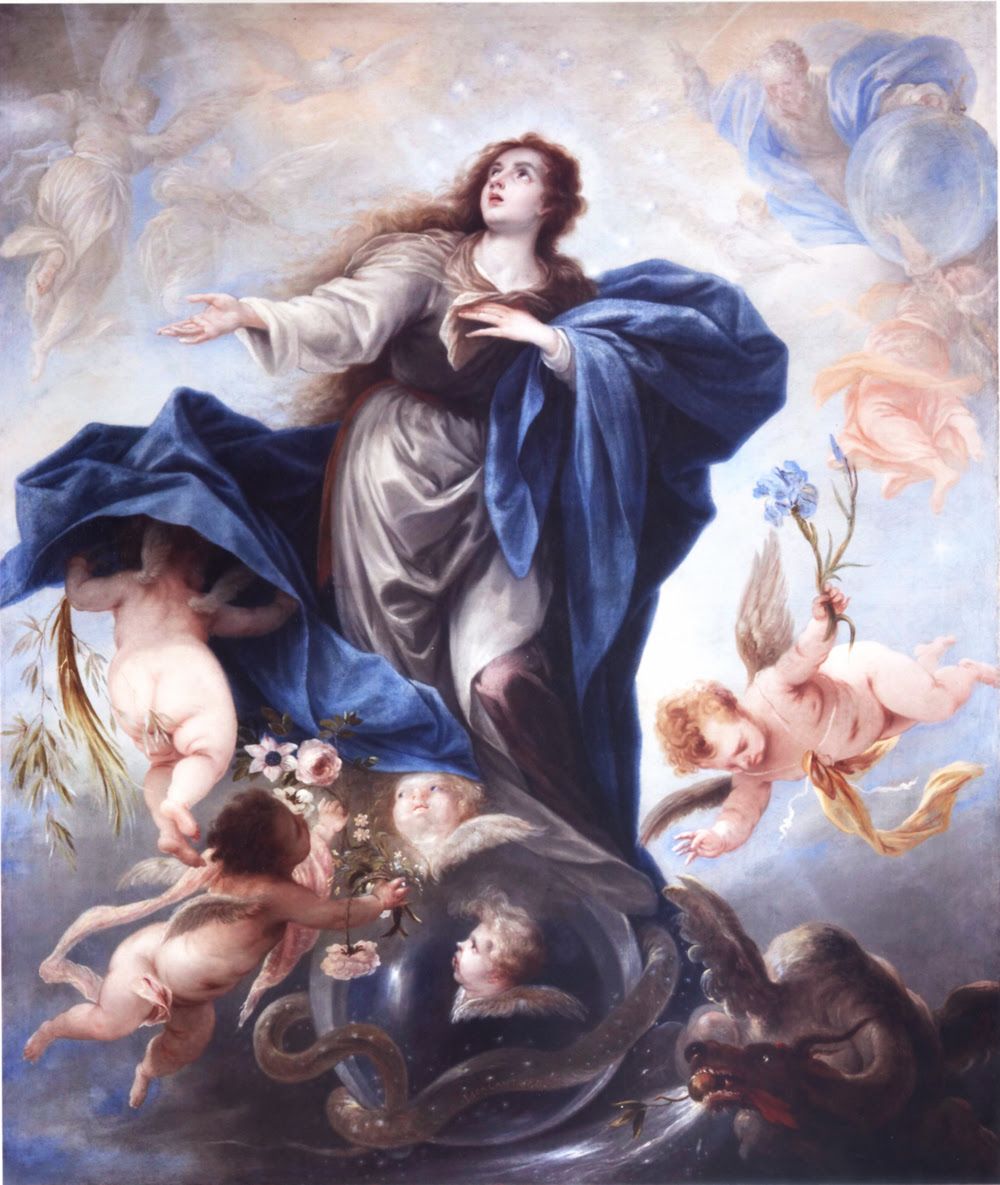 I love the Solemnity of the Immaculate Conception!

The readings for this Solemnity start with the Genesis story which contains what we are taught is the Protoevangelium:  The first announcement of the Messiah Redeemer.

I will put enmity between you and the woman, and between your offspring and hers; he will strike at your head, while you strike at his heel."  Gen: 3:15


In this passage we are shown that even at the moment of our most profound failures the God of the universe never abandons us.    He never gives up on us. NEVER!  It is also a passage which did not yeild its full significance until the Gospel of Christ is revealed to us. I have linked you to a John Paul the Great general audience on The Protoevangelium of Salvation, I highly encourage you to read it!  Here is a snippet:

The analysis of the "protoevangelium" informs us, by means of the announcement and promise contained in it, that God has not abandoned the human race to the power of sin and death. He wished to rescue and save it. He did so in his own way, according to the measure of his transcendent holiness, and at the same time according to a self-effacement such as only a God of love could display."


I think that the line "according to the measure of his transcendent holiness, and at the same time according to a self-effacement such as only a God of love could display." are tremendous words to ponder, and especially in light of His great gift to us of the Blessed Mother!  Those words are referring to Christ's obedient sacrifice, in which Adam's sin is undone, but that sacrifice is also reflected in the obedient fiat of Mary, who was the chosen woman to reverse the disobedience of Eve.  In my more reflective moments, I cannot fathom our God's self-effacement. God, whose power and might are so great that Moses cannot look upon His face and live, yet He wills to be born into this world of a woman, so as to lift up womanhood, in fact, motherhood (and ultimately all of redeemed humanity) to a high beauty and magnificence that cannot be contained in this world.  He then gives this woman to us to be our mother as well, and in all this she gives her total "fiat".

Just contemplating Mary reduces me to a puddle of emotion, and I am not an emotional person, but the gift of Mary as my mother touches me - and mystifies me profoundly! Only a God of unfathomable tender mercy would know that our hardened hearts cannot withstand the love of a mother, a mother who freely, with unrestrained love and complete trust in God said yes to the Incarnation and all the sacrifice, suffering (and yes, also joy) that came with it.  She entrusted her whole self to Him in order for God's salvation for each of us to be fulfilled.

Consider this passage from Pope Benedict XVI's newest book:  Jesus of Nazareth, The Infancy Narratives, as our Pope reflects on the moments after the angel Gabriel has departed from her, and of the great reserves of faith that she was gifted with in her Immaculate heart:

The great hour of Mary's encounter with God's messenger - in which her whole life is changed - comes to an end, and she remains there alone, with a task that truly surpasses all human capacity.  There are no angels standing round her.  She must continue on the path that leads through many dark moments - from Josephs's dismay at her pregnancy to the moment when Jesus is said to be out of His mind (cf Mk 3:21;Jn 10:20), right up to the night of the cross.

How often in these situations must Mary have returned inwardly  to the hour  when God 's angel had spoken to her, pondering afresh the greeting: "Rejoice, full of grace!" and the consoling words: "Do not be afraid!"  The angel departs; her mission remains, and with it matures her inner closeness to God, a closeness that in her heart she is able to see and touch,". (Pg 37 -38)


Her task was unbelievable, at times unendurable, yet she believed and endured, because she knew His love, and as our Mother she intercedes for each of us that we may be filled with that love also. She is a Our Lady, Our Mother and there is no beauty in this world, or the next, that can exceed hers.  And the Father's using her in His plan of Salvation is also a reflection on how complete His redemption of us will be.  Let me put up another passage from Pope John Paul's general audience text:

"The Father of mercies willed that the Incarnation should be preceded by the acceptance of her who was predestined to be the mother of his Son, so that just as a woman contributed to death, so also a woman should contribute to life. That is true in outstanding fashion of the mother of Jesus, who gave to the world him who is Life itself and who renews all things, and who was enriched by God with the gifts which befit such a role. It is no wonder therefore that the usage prevailed among the Fathers whereby they called the mother of God entirely holy and free from all stain of sin, as though fashioned by the Holy Spirit and formed as a new creature. Adorned from the first instant of her conception with the radiance of an entirely unique holiness, the Virgin of Nazareth is greeted, on God's command, by an angel messenger as 'full of grace,' and to the heavenly messenger she replies: 'Behold the handmaid of the Lord, be it done unto me according to your word.' Thus Mary, a daughter of Adam, consenting to the divine Word, became the mother of Jesus, the one and only Mediator. Embracing God's salvific will with a full heart and impeded by no sin, she devoted herself totally as a handmaid of the Lord to the person and work of her Son, under him and with him, by the grace of almighty God, serving the mystery of redemption" (LG 56).

Thus in Mary and through Mary the situation of humanity and of the world has been reversed, and they have in some way re-entered the splendor of the morning of creation.


Joy!  Just think of what God has given us in Mary, just think of what it means for you and me who are individuals mired in our sinfulness, in our disordered desires and in our fears.  I believe it means that -with our daily Fiat, and our daily repentance -  our redemption will not only be a wiping out of even our worst sins,  but a complete reversal of all that enslaves us.  What ever sin that tempts you and makes you cringe in shame about yourself, will, when you give it to Him, with faith and in due time, be sanctified and reordered to serve God.  Trust Him as Mary did!  If your worst sin is cowardice, God will bring about in you a reversal and He will allow you opportunities to become courageous and bold for Him.  If it is lust, God will draw out from you the truest, most pure, devoted and passionate love of Him and of all His creation in it's beauty and power.  What astounding mercy!  What an awesome gift! But your daily repentance and your daily fiat and also your daily endurance in faith, modeled after Mary, is needed.  And Mary, in her Immaculate Conception and in her radiant and unique holiness, is the model, par excellence, of Christ's words to us in Revelation:  "Behold, I make all things new."


Hail Mary, full of grace!
The Lord is with you!
Blessed are you among women,
and blessed is the fruit of your womb Jesus.
Holy Mary, Mother of God
Pray for us sinners,
now and at the hour of our death.
Amen