An Excercise in Love

This morning as I pondered the second reading, I decided to write out this well-known love passage of Paul, substituting my name for the word “love.” 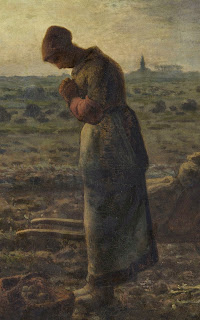 Sharon is patient,
Sharon is kind.
Sharon is not jealous...

With each movement of my pen, the truth of those attributes active within me became more tangible.  By the time I got down to

I realized that if I graded myself on a scale of one to ten from the mighty list of Paul, I would get a five at best in any of them and that only because over the years, a bit of the Love of God has seeped into me in spite of my resistance.  A more accurate writing of the passage would be:

But the exercise encouraged me to regard Love more practically,  moving me from the concept to the flesh and blood reality of myself in a real world.    I think that God is giving me good material for a nightly examen and I trust that the Holy Spirit will set a fire of light to those areas in which I am doing better, and those that are flashing “Serious work needed here.”

I continued the process through the whole passage that concludes with 13.13,  and which includes a nearly complete compatibility with Paul's words:

Presently, I know  partially;
Then I shall know fully
as I am fully known.  (Another invitation to ponder--what does it mean to be “fully known?”)

Today I have received my Lenten assignment that I hope will go full circle from concept to present  reality, to eternal truth:

“Faith, Hope, Love remain these three.  But the greatest of these is Love.”
Posted by Heidi at 2:04 PM