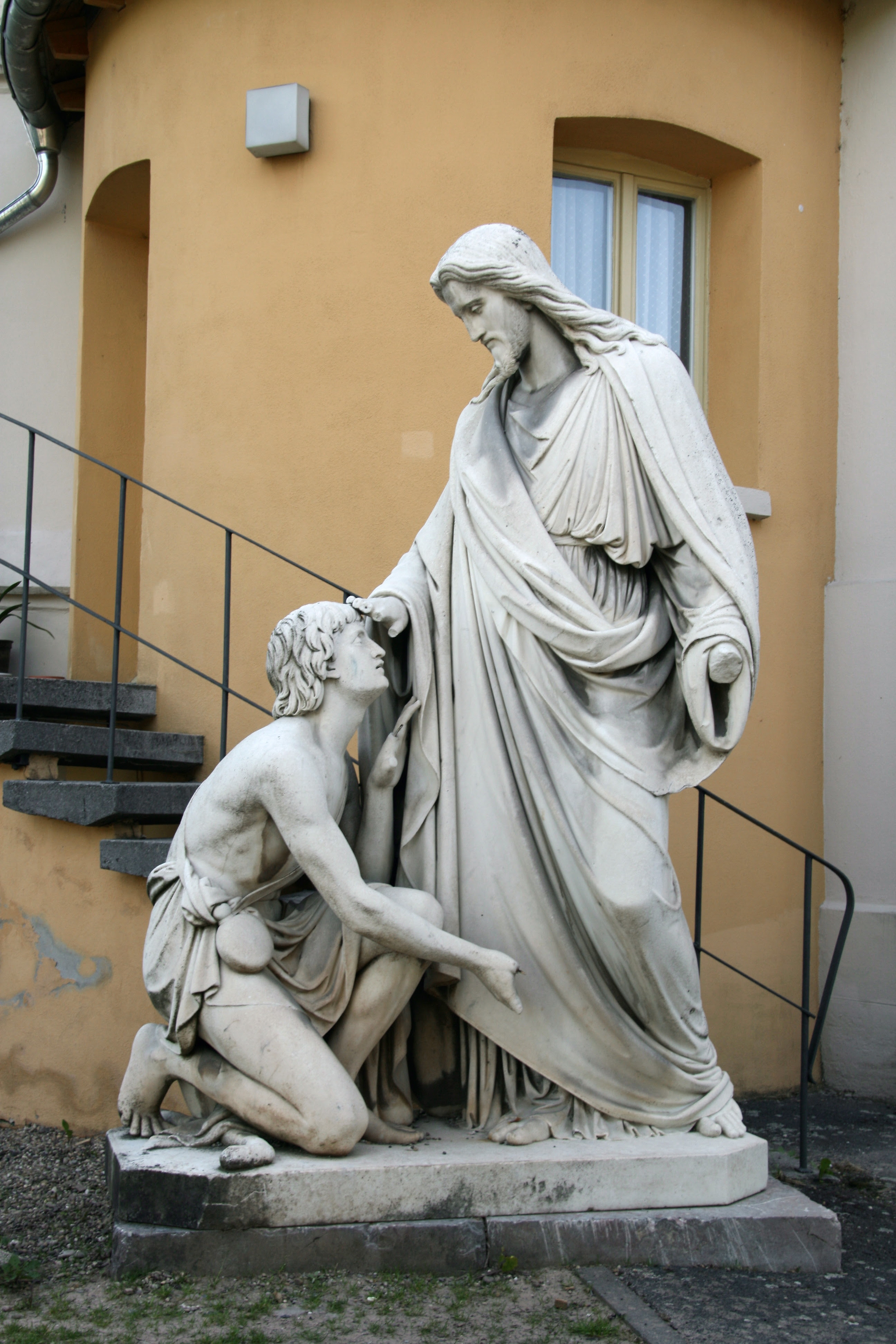 "As Jesus was leaving Jericho with his disciples and a sizable crowd, Batimaeus, a blind man, the son of Timaeus, sat by the roadside begging.  On hearing that it was Jesus of Nazareth he began to cry out and say, 'Jesus, son of David, have pity on me,' And many rebuked him, telling him to be silent.  But he kept calling out all the more, 'Son of David, have pity on me.'  Jesus stopped and said, 'Call him.'  So they called the blind man, saying to him, 'Take courage; get up, Jesus is calling you.'  He threw aside his cloak, sprang up, and came to Jesus,  Jesus said to him in reply, 'What do you want me to do for you?'  The blind man replied to him, 'Master, I want to see.'  Jesus told him, 'Go your way; your faith has saved you.'  Immediately he received his sight and followed him on the way."

Oh to have the faith of good Bartimaeus!  To persist in seeking Jesus, not merely a great teacher, or wonder worker, but to have the insight to know who Jesus is and the humility to cry out to Him:  "Jesus, son of David,  have pity on me. "  To continue to cry out, even as the crowd rebukes and shushes him.  When Jesus does call him, before Bartimaeus even comes to him, he casts off his cloak!  Sister Anne Shields in her  podcast on this Sunday's readings remarked that a cloak was an especially important  item of clothing, it was warmth and shelter from the elements...and it was all the more important for a blind beggar, who once he had cast off that cloak in that sizable crowd and got to meet Jesus, how would he ever find it again?  But that did not matter to Bartimaeus, he was single-hearted in his quest to meet Jesus and then to follow Him.
I am sure his humble poverty and desperate situation help focus his mind and heart on the Lord.  Yet,  in our time and culture, the spiritual situation of so many around us is no less desperate.   Do you believe that Jesus is more than just a great teacher and preacher?  Are you following the crowd of our time?  A crowd  of followers who base their faith on the abstract concept that the Lord is an example of a supremely good man, but, are blind to the authentic power of the Lord.  A crowd that may well have many good committees to belong to and charities to serve, yet neglects a deep, profound and personal relationship with Jesus, who though He is the Son of David, responds to the cries for mercy from His followers in profoundly personal ways.   Do you believe that this Jesus was crucified for you, and was raised for you?  Is He your personal Lord and Savior?  What cloaks your sight, what stifles your love for Him?

Just before I entered RCIA  I was once mildly rebuked by a cradle Catholic - and one who was thought to be very devoted to the faith and in particular to social justice.  I was rebuked for using an admittedly protestant phrase in describing Our Lord.  I said He was our personal Lord and Savior.  She responded, rejecting the idea that He was our personal Lord and Savior.  She felt that to claim Jesus in such an individual way was selfish!  I remember quickly backing down from the comment, feeling rather idiotic, as if I had just mumbled some strange fundamentalist mumbo jumbo.  I was shushed,  and I was not as courageous as Bartimaeus.  This friend of mine was a cradle Catholic, and who was I to presume that she did not know how to practice her faith?

That casual conversation really disoriented me!  I became Catholic, but I was really blinded to His presence in so many ways!  Much of this was due to my own weakness,  my need to follow the crowd so I did not look like some naive fool took precedence..(.although in retrospect a stronger formation in the Catholic faith would have gone a long way to redirecting my faltering footsteps - thankfully this has since changed a great deal).  I faithfully went to Mass, but my heart I cloaked, only what I could understand with my mind was allowed in, only what could be rationally explained was real, the rest of the stuff was more or less quaint traditions.  Jesus kept slipping farther and farther in to the background.

Until one day, I was confronted with my lack of faith in Jesus.  A longing for someone greater became an acute pain.  My blindness was revealed, and I cried out to Him, to Jesus the Son of God in prayer.  I reached out to Him, even though so many respected people around me diminished His divinity and rationalized His resurrection.  Only He had the words of eternal life, only He could save me.  I needed Jesus, the Son of David, the Messiah, the Son of the Living God, to have mercy on me.  When Jesus responded to me,  when I once again knew that He was not just an abstract concept or a construct of the early Church, but that He was my Lord, He was my Master, He was my Lover....He was everything, and without Him I was hopelessly nothing, I was able to cast off that cloak that kept my heart away from my faith.

I am Bartimaeus, and I suspect, so are you!  Because faith in Jesus is a relationship with Him!  It is heart and mind fully devoted to Him.  If you say you have faith, but your relationship with Him is more of a cold concept  than a passionate love, you need to cry out to Him as Bartimaeus did.  Do not fear the crowds rebuking you!  Reach out to Him! Cast off that cloak that keeps you from Him and let Him give you sight to see Him in the Eucharist, In the Scriptures, in your neighbor!  Show them the way, because there is nothing selfish about this personal relationship with the Lord!  Because of Bartimaeus' faith  and courageous persistence  other eyes were opened!

Peace and Grace to all of you!