I love Lent! I love how despite it being a season of repentance, wailing and gnashing, ashes and sack cloth, the lectionary readings for this season are full of hope. Old Testament scripture readings manifest God's future plans for the coming of the Kingdom, the inner transformation of Man's heart and the great love of our God as He heals and transforms our sinful nature, relieving sin and guilt, offering us a new life forever. The daily New Testament readings clearly explain Jesus' teachings, showing that progressive opposition to Jesus' work and teachings, yet containing those hidden gems of theophanies and angelic appearances to stimulate our hope that greater things will happen soon.

On Monday (3-26), the annunciation story (Luke 1: 26-38) surprised me... a classic Advent story appears in one of the most solemn and penitential seasons? Yet, imagine the hopeful memories this event gave to Mary as she later followed her Son on the road of sorrows to Golgotha. Perhaps she even retold this to the apostles as they sat huddled in fear in the upper room, as they all wondered what good could come of Jesus ' work. Mary might also be able to retell the story of St Joseph's own annunciation event, as described in the first chapter 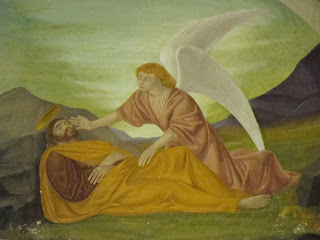 of Matthew, which was read on St Joseph's feast day March 19th. These critical events show how God touched the lives of the Holy Couple, and demonstrated the couples' immediate and trusting response, having the faith in things unseen and the determination to cooperate with God's will despite very trying circumstances. How wonderful to remember such inspirational, angelic experiences especially when the situation appeared to be at its worst! 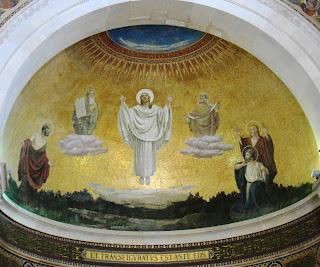 Jesus, himself, was no doubt an inspiration to his small band of followers after the crucifixion. On March 4th, we read about the Transfiguration (Mark 9:2-10), where Jesus transfigured in glory along with Moses and Elijah, appeared to his three closest disciples. God, the Father, gives voice, " This is my beloved Son. Listen to him." At the time, the Transfiguration was bewildering to the disciples, Peter, James and John. Even more confusing, Jesus told them not to mention it until after the Son of Man had risen from the dead. Certainly, only in hindsight and great pondering after Jesus' death and resurrection, would this otherworldly event provide any confidence in Jesus as Lord and Savior.
A similar theophany occurred in Sunday's reading (3-25), when Jesus arrived near Jerusalem and determining that " the hour has come for the Son of Man to be glorified" (John 12:20-33), Jesus asks God to glorify his name. God responds, in the last theophany prior to the crucifixion, "I have glorified it and will glorify it again." We see in this reading that Andrew, Philip and a crowd of people hear something. Some describe it as thunder, reminiscent of OT theophanies on Mount Sinai. Others said it was an angel speaking to him. Jesus confirms that it was a voice and it is for the benefit of those who hear it and not for Jesus' benefit. Oh to hear the voice of God impart His wisdom and encouragement! Despite the shocking nature of theophanies, the crowd and even some of the disciples still lacked confidence and trust in Jesus as Lord and Messiah. (see John 12:37 Although he had performed so many signs in their presence they did not believe in him...)
Today, I feel greatly encouraged by these events of salvation history, since I've been pondering it these last few weeks. But, I suspect the disciples had some doubt and needed to see proof of the glorification, i.e. the resurrected Jesus, power and action of the Holy Spirit,to feel fully confident in Christ our Savior.

In fact, after reading all four Gospels on the post-resurrection appearance of Jesus, the disciples had their full share of surprise, amazement and disbelief upon hearing that Jesus was no longer in the tomb. Jesus appeared out of nowhere to the disciples in Jerusalem (Luke 24:36-49), they "were startled and terrified and thought that they were seeing a ghost." Jesus had to present his hands, feet and body before them, and then eat something to prove he was really alive. Certainly, Jesus has some kind of other effect on people and he's able to"open scriptures and their minds" to understand them. Remember the disciples on the road to Emmaus after the resurrection, "were not our hearts burning (within us) while he spoke to us on the way and opened the scriptures to us?" (Luke24: 32). Then in Jerusalem, when he suddenly appeared (Luke 24: 45) he "opened their minds to understand the scriptures." In the final analysis here, through his word, Jesus gave hope: Remember your word to your servant by which you give me hope (Psalm 119:47)
Obviously, our Lord's work with the disciples was not finished, as his Advocate needed to arrive to imbue the disciples with all the super natural gifts but also hope for managing this very difficult life. I find it a pleasant surprise to see how reviewing these last five weeks of daily readings have been uplifting in this rather solemn season of repentance. Thank you Lord for the scriptures, your word, which still makes my heart burn with love and hope, some two thousand years later!

1My son, if you receive my words

and treasure my commands,

2Turning your ear to wisdom,

inclining your heart to understanding;

3Yes, if you call for intelligence,

and to understanding raise your voice;

5Then will you understand the fear of the LORD;

the knowledge of God you will find;

6For the LORD gives wisdom,

from his mouth come knowledge and understanding....

Posted by Janet Goodwin at 3:26 AM