The Sass Master in Mordor: A Meditation on Evil


One of the most terrifying insights into evil that I have ever read was in C. S. Lewis' second book of his space trilogy, Perelandra.  In this book the hero, a man named Ransom, was charged with protecting an un-fallen planet and its inhabitants from suffering a fate like that of Earth's. He finds himself engaged in a battle of wits with the Evil One, who has possessed the body of the arrogant and deluded Professor Weston.  This un-man (as Lewis names it) is trying to tempt the Lady who inhabits this paradise to break the one rule that has been given her by Maledil (Jesus/God).  The demonic corpse beguiles the woman with many subtle temptations to vanity and to envy.  His preternatural intellect and cunning are slowly winning, but every once and a while the woman (and Ransom) need to rest.  When the demon is "off-duty" with only Ransom for company what we see is something quite different from the sly subtlety of  his temptation of the Lady of Perelandra.

"He (Ransom) had full opportunity to learn the falsity of the maxim that the Prince of Darkness is a gentleman....It was not like dealing with wicked politicians at all: It was much more like being set to guard an imbecile, or a monkey, or a nasty child.  What          had staggered and disgusted him when it first began saying "Ransom.....Ransom....."  continued to disgust him every day and every hour.  It showed plenty of subtlety and intelligence when talking to the Lady; but Ransom soon perceived that it regarded intelligence simply and solely as a weapon.....Thought was for it a device necessary to certain ends, but thought in itself did not interest it." Perelandra; Scribner 1972; pg. 110

In fact, Ransom had to endure long hours of this Un-man amusing itself by mutilating animals and plants, or performing juvenile obscenities with the body it inhabited, and endlessly, pointlessly repeating his name over and over again: "Ransom, Ransom, Ransom" When Ransom would respond it would say "nothing".

I bring this up because on Tuesday I took the Sass Master (aka Sophia) and her two year old brother to participate in our parish's day to keep the vigil for 40 Days For Life at a local Planned Parenthood facility. I told her we were going to Mordor (yes, I have just gone from Lewis to Tolkien).  Mordor is a place where the goodness of creation is corrupted and manipulated to such an extent that it becomes hell to everyone  It is a place where identity is based solely on material productivity and therefore everyone loses their authentic and God given human identity (along with their God given human rights). Here human freedom is cast off for enslaving licentiousness under the watch of a despotic eye whose main strategy is to cut you off from your true identity and from any hope in anything beyond the breath and vapors of this world. But, I digress.

I am being so dramatic because the world around me seems so sleepy on this subject, and the temptation to despair every time I engage in this battle is growing; a creeping awareness that in the face of powers and principalities, who am I?  The cunning of our enemy is formidable - to lull us into the sleepy complacency that abortion is simply a medical option for those who are in hard situations, relieving us, the larger community, of the burden of having to provide assistance for both a mother and a baby.  Or, if a person has a more awakened sense of charity , the enemy will corrupt the ideal of fighting for human rights, cynically diminishing our idea of what is a worthwhile human life to expend our resources on.  As a result we have impassioned people, who in the name of defending human rights, perversely end up on a slippery slope to despotism, placing the right to life on the shifting sands of the ever elusive concept of who is human enough to warrant the effort to defend said rights.  Yet, when we undermine the right to life, we undermine all our rights, and give the powers-that-be in a given time way to much authority over determining whose rights they will defend and uphold.

This battle is difficult to engage. But, engage we must, with prayer and endurance.  We who stand for the right to life to be firmly and decisively placed at the moment of conception will stand our ground.  We have truth and science on our side.  They have lies and distortions.  Do you know what I often discover when we firmly stand our ground in the face of evil?  That evil at it's core is tedious and infantile, and when it cannot dissuade you through cunning, it will simply provoke it's minions to taunting or obscene displays of profanity and silly, juvenile acts.  Hence the description of evil, and how banal and utilitarian it really is by C.S.Lewis, is truly insightful.

So it should not surprise anyone, that while our group received a good deal of encouraging thumbs up, there were others who shouted out curses at us (along with the profane gestures) or who menacingly watched us as they repeatedly (and at a distance) circled the block we were on. But most silly, and disturbing, of all was the actions of an elderly man.  He had approached my friend Angie earlier.  She was holding a sign showing a baby in the 6th month of fetal development.  Apparently he wanted to know what we were doing.  He began to ask her what her sign said, and Angie cheerfully turned around to show him the picture.  As soon as he saw it he stopped talking mid sentence, grunted "OH" turned around and left.  Angie looked back at me, we both shrugged (Angie, who has a much more generous heart than me, actually smiled and said "I'm not sure what that was about.").  But that old guy had more to reveal to us about the depth of his soul.

As an elderly couple, who were taking our place, were busy getting set up and Angie and I were preparing to leave, a shabby pickup quickly drove up in the parking lot we had our backs to. I was holding the Sass Master, and she was resting her head on my shoulder, her face toward the parking lot while her brother was securely strapped in his stroller, when I felt a splash on my neck and Sophia jumped.  I turned around to see this old man with a spray bottle full of what I believe was water -  shooting it at us cackling the whole way!  Sophia was hit square in the face, (otherwise no one would have noticed because he was spraying us from behind and we were all covered in coats and long sleeves, as it was a bit cold out).

Was he defending the "right to choose"?  Was he just a weak-minded coward who gets his jollies pranking woman, children and the elderly?  What point was he making to spray a four year old girl in the face?  (My dear friend Angie - who only noticed what happened because of Sophia's startled yelp -  in her completely un-cynical and gracious heart thought that possibly he was spraying holy water on us....yeah, old men often bless a group by sneaking behind them to spray them cackling as they speed off).  In reality, C.S.Lewis sums up his actions, and the cause that provoked them perfectly, and also the actions of many other groups that stand against Truth:

"If the attack had been of some more violent kind it might have been easier to resist.  What chilled and almost cowed him was the union of malice and something nearly childish....Indeed, no imagined horror could have surpassed the sense which grew within him as the slow hours passed, that this creature was by all human standards inside out- it's heart on the surface and its shallowness at the heart.  On the surface great designs and an antagonism to Heaven which involved the fate of the worlds:  but deep within, when every veil had been pierced, ...nothing but a black puerility, an aimless empty spitefulness content to sate itself with the tiniest cruelties, as love does not disdain the smallest kindness." (Perelandra; pg106)

Actually, it was Angie's gracious remark that provided the best defense against this man's darkness.  How can his malicious intent stand when your target is so willing to shrug it off?  How can darkness prevail when you are with someone so focused on the light?

So what to do from here?  Stand our ground, fight the good fight and put on the armor of God (to which my fellow blogger, Joze, suggested that we add goggles to) and as Saint Paul wrote from his prison cell:

"Finally, brothers, whatever is true, whatever is honorable, whatever is just, whatever is pure, whatever is lovely, whatever is gracious, if there is any excellence and if the is anything worthy of praise, think about these things.
Keep on doing what you have learned and received and heard and seen in me. Then the God of peace will be with you."  Philippians 4:8-9

And so we will!  The Sass Master (who -  true to her sassy nickname -  was completely unruffled by the incident and quickly concluded that since we were in Mordor that man must have been an orc) is ready, and so am I!  But with goggles! 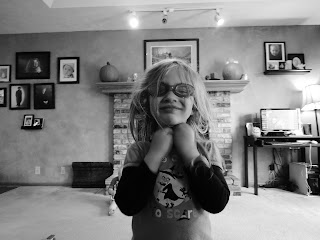