An Essay on Angels by Diane Muelleman 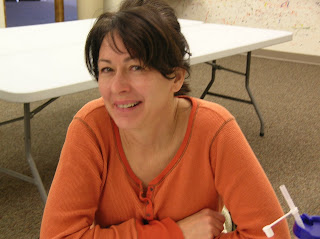 Of importance -What difference does it make if I believe in angels or not?
I liked the way Peter Kreeft addressed this question in his book on Angels. (p.21) He suggested that “believing in” can mean three different things; simply an opinion, a personal trust, or religious faith. According to Mr. Kreeft the third meaning, religious faith, would suggest idolatry or worshiping false gods and would not make sense for us. But I want to share with you why having a personal trust or reliance on angels is a real gift from God.
I admit it was not easy for me to open my mind to the possibility that angels exist.  I had to stretch myself spiritually. In doing so I began to experience wonder and awe as if a small child again. I think my research for this paper has helped me begin to develop personal trust in angels and that gives me a feeling of security and hope with much gratitude for God’s wisdom in creating these “beings” just for us.

Substance –If they exist, then what are angels made of?
Angels are non-material, pure spirit; they do not have physical bodies like
us.  But they can affect matter such as assuming bodily form.

“The spirits of angels are indeed bounded by space, yet their knowledge extends far above us beyond comparison; for they expand by external and internal knowing, since they contemplate the very source of knowledge itself.” (Aquilina p.10)

“There is not always a sharp distinction between the angel as a personal being and as a personification of the divine word or the divine action.” (DBM p.31)

Business –
Angels are messengers and Jesus is the message.  God sends them to
guard and guide us. Angels circulate between the soul and heaven to assist God in transmitting  spiritual goods from him to us. Angel isn't really a name it is more of a job description.

On the basis of references to them in the Bible, angels are traditionally ranked in a so-called celestial hierarchy of nine orders. (Catholic Encyclopedia p. 68)

The next three levels fulfill God’s providential plans for the universe, like middle management personnel:

Quantity –So what is the significance of the number nine?

Dilemma – Yes there are “bad” angels”.

Some angels were jealous of man because he was made in the image and likeness of God. They fell from heaven (Rev.12: 9) breaking the unity of God’s spiritual creation.  Now we find ourselves in the middle
of a spiritual battle between the powers of light (angels) and powers of darkness (devils).

“The angels were created with free will. They could accept or reject God, and not all of them made the right choice.” (Aquilina, p.10)

Perhaps because of pride, some did not return God’s love. (Catholic Source p. 97)

Be of consequence -Are they necessary?
To the extent that we are imperfect, yes we do have need of angels. They are messengers of hope and protectors of souls.

“The existence of the spiritual, non-corporeal beings that Sacred Scripture usually calls ‘angels’ is a truth of faith. The witness of Scripture is as clear as the unanimity of Tradition.” (Article 328 In C.C.C. p.85)

Significance-The coming of Christ changed our relationship with the angels.

Man now has in Christ immediate access to the Father without passing through the intermediary of the angels who are only there to aid him in the first stages of his ascent.” (Danielou P. 34)

Friendship with an angel lifts humans up because that is what God intended.  This is beautifully illustrated in the book of Tobit in the Old Testament beginning with chapter 5 verse 4.  The angel, Raphael, journeys with Tobit providing companionship and teaching him along the way.

In Rev.19: 10, in the New Testament, an angel said that they are now “fellow servants” with us. They worship with us so that together we give greater glory to God.


Angels are present invisibly at the liturgical services.
(DBM p. 31)

Angels are co-workers with God for our good.

God created a universe of beings that are interdependent (Aq p. 39)

If we develop a personal trust in our guardian angel, that finite bodiless spirit can become a positive aid for us and help us gain interior peace as we progress in our spiritual life.

I once read that an active spiritual life makes the soul enter into the world of the angels. I understand that statement better now. We are meant to work together and if each one of us learns to trust in the guardian
angel delegated to us by our creator, there will be spiritual unity as God intended.

His will be done.